When I saw this: 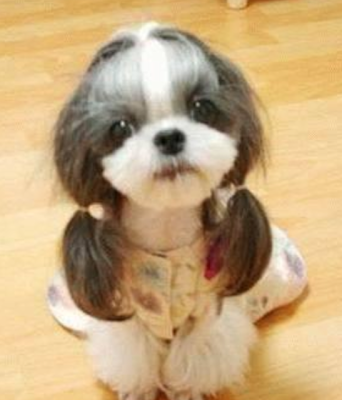 I immediately thought of this: 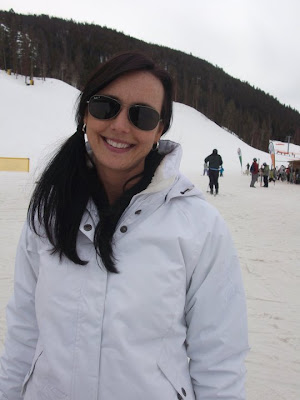 The puppy is not mine but when I saw its innocent,little face and precious pigtails it immediately reminded me of this picture of my sister from a ski trip she went on earlier this year. I have received confirmation from my beautiful, beloved, big (older, definitely not bigger) sister to post her picture on my blog and she is also aware of the content but has yet to see the comparison picture. Can't wait to hear what she thinks!! :)

*Photo credit for the adorable shih tzu goes to myfunnypics(dot)org
Posted by MrsSki at 8:00 AM 1 comment:

Oh, Friday Fragments, how I have longed to get to this day for your fragments. If you've never heard of Friday Fragments you can head over to Mrs. 4444's bloggy space Half Past Kissin' Time to read all about it and learn how to post up your own fragments! Trust me, it's fun stuff.

~I am very pleased to announce that Mr. Ski and I have been smoke-free for ONE YEAR AND TEN DAYS!!! It has been quite the journey, a lot faster and slower than I expected it to be but all in all I am so glad we decided to give up smoking. Do I miss it? Yep. But I also miss my childhood and you couldn't pay me to go through middle school again. I guess you could say I never want to have to quit smoking again so that will keep me motivated to keep quit! We are very proud of ourselves and looking forward to doing something fun with the money we saved.

~I had to 're-home' a pretty scary spider yesterday. I usually don't kill them since they eat bugs but it was right under our power box outside and I didn't want that little bugger laying eggs in my power box! No worries, I didn't kill it just moved it with a stick.

~Fred, the cow, who had a starring role in this post must have been busy over the last few months. I noticed today that there were a ridiculous amount of darling, little calves laying in the shade. Hopefully, they weren't all conceived in front of the school bus. :/

~Finally, I want to give a shout out to the Packers. I am so proud of you guys!! 4-0!!! That is incredible!!! Big thanks to Mr. Ski for helping me see the cheesehead light, because in the last four years I have learned their history and fallen in love with their teamwork, heart and dedication; I now will forever be a Packer fan!! GO PACK GO!

Hope your weekend is happy!
Posted by MrsSki at 5:33 PM 3 comments:

I am scared of germs. There. I said it.
I wash my hands entirely too much, especially when cooking.
I feel like if I touch anything that carries bacteria, i.e. salmonella or E.Coli. I must wash my hands else I spread it all over everything I touch next; the refrigerator door, the pull on the cabinet and the one the drawer, the jug of milk, the salt shaker, the faucet, the oven knobs and the list could go on forever.
By the time I'm finished I've gone through a ridiculous amount of paper towels, a half of a bottle (or more) of soap and I've used surface wipes on anything that I may have touched while contaminated. All that after touching one piece of raw chicken. Three pieces to go! :)

When we go out to eat I use hand sanitizer directly after reviewing the menu and selecting my food. Then I strategically put it where I don't have to hand the menu to the server, therefore, they can just pick it up and I don't have to re-sanitize. Because the thought of every person who has touched the menu before me is nauseating. I then make a silent vow not to touch anything until I eat. I have been seen using napkins to hold the salt and pepper shakers; just think about all the people who have sat there before you who touched the shakers, now that is scary stuff. I don't know about you but I immediately thought about wee Timmy who didn't wash his hands after going to the bathroom, Aunt Myrtle who just had a coughing attack and don't forget Uncle Rube who was just in his truck petting the farm dog, Louise. <-- That last sentence got pretty imaginative, eh? I did have almost as many imaginary friends than real friends in elementary school so to say that I have an active imagination is the understatement of the year.

There is just something about germs, maybe it's because they're so conditional and I like things that are concrete. Like if you touch the boiling water it will burn you or if you put your finger in the electrical outlet it will shock you. Germs, however, are totally unpredictable; they can sometimes harm you but most likely your immune system will take care of it without you even knowing there was something wrong. But then there is that small chance that you get exposed to the germ that is the next big, terrible disease. And you die. Haha, probably not but that was getting pretty intense, I had to lighten it up by making it sound more dire than it probably would be.

As I'm sitting here reading over the paragraph I just wrote I started to wonder why the title of this post was Double Standards 101, oh yeah...I remember now.

I am a habitual nail biter.
Posted by MrsSki at 7:08 PM No comments:

I have a funny husband.

I'm going to start keeping track of all of the hilarious things Mr. Ski says...because seriously, he cracks me up!

One night Mr. Ski and I were entering a restaurant that has those gumball, bouncy ball and sticker machines in the front. Being the gentleman that he is, he had opened the door for me and was holding it open for two ladies and a little boy to come out as well. Except they weren't coming out, instead they were watching the little boy try to make a choice at the sticker machine. It was apparent that they were frustrated by his indecision. One of the ladies thanked Mr. Ski and then apologized for their delay. His response: "No worries, it's a big decision. I plan on picking out a sticker after dinner too." You should have heard those two ladies laugh and seen that little boy's face light up! Priceless and even though it happened months ago, I still laugh about it. He's just not afraid to make people smile and that's a pretty great quality, or at least I think it is!

The next scene was at a different eating establishment that has a country store as well as a restaurant, bet you can't guess which one! :) Having already ordered we were making small talk while waiting for our breakfast to arrive and Mr. Ski says to me: "Would you like to play 'touch a peg, get the flu?'" I totally lost it, I'm pretty sure I was crying from laughing so hard.

Lucky for me, laughing is one of my favorite things to do so having a funny husband makes my life that much more sweet(and funny).
Posted by MrsSki at 5:08 PM No comments: