It's finally Friday and time for my most favorite Friday blogging topic...Friday Fragments! If you're interested in seeing what all this fragtastic fun is all about head over to Mrs. 4444's blog. She's not only the creator of this bloggy gem but also an incredible human being!

*There was a dove sitting on our roof when I got home today. There was, however, no sign of an olive branch. I thought those two were a package deal.

*I had to give out several 'you're an idiot' head shakes this week during the commute. People were all about driving like they just didn't want to get to their destination alive.

*For the most part, summer is not my favorite season (hot temperatures and I do not get along, just ask Mr. Ski). But I am grateful for the extra light in the evenings. For instance, tonight it will allow Mr. Ski and I to go play a round of disc golf before sunset. Yay!

*The very hungry dinner guest that I blogged about in this post came through town again last weekend. In preparation for his visit I made a dish that is known to feed multiple (try 8-10) people except this time it only fed three people. THREE. Neither Mr. Ski nor myself ate more than usual so that means he ate enough for at least six people maybe seven. Shew.

*Mr. Ski is my workout buddy and we usually do all of our strength training at the gym. Usually I'm not sore at all after these strength training sessions Mr. Ski coaches me through. I even cockily thought to myself 'these aren't so bad, I don't even get sore.' Of course I didn't tell him that, it's not like I'm upset that I'm not sore and I certainly don't want to encourage him to make it more challenging. All of this was applicable until this past Wednesday, he must have read my mind because after that session my legs are still sore and I'm walking like I just climbed down from a three day horseback trek.
Note to self: no more complaining about lack of soreness, apparently once you reach the four year marriage mark he knows how you think.

*Finally, I hope everyone has a fun and safe Fourth of July. Happy Independence Day, ya'll! :) 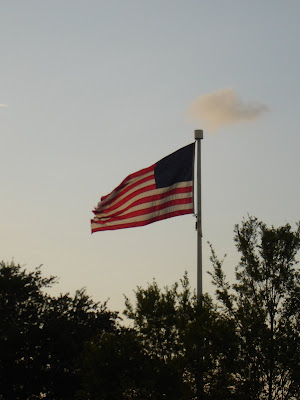 -This photo was taken by me in Savannah, GA on July 4, 2008. I took it with the flag flying in this direction for the following reason:
"Some wonder why our soldiers wear the flag 'backwards' on their right shoulders. Here's why...As the flag bearer would charge with Infantry and Calvary units his rapid forward momentum would cause the flag to stream back. If a soldier is charging into battle the flag would give the appearance of forward motion. This is why our soldiers wear the flag patches on the right shoulder 'backward.' Because retreat in battle, as any soldier will tell you, is not the Army way." -Snopes

May we never forget those who have protected us and those who continue to protect us.