I made a list of things to blog about. That's how forgetful I've been lately. This lists contains the following words to remind me of blogging bits:
Sbux
Matching
Dishwasher
Knife
Finger
Feet

Quite a list, huh? And magically all of these events happened on the same day, Tuesday of last week. So, let's start at the very beginning (which also starts the "Doe a deer" song from The Sound of Music to start playing in my head):

[] Sbux...I was at Starbucks last week getting my coffee and I happened to be dressed up (royal purple button-down, grey pants and heels) and there was a little lady in front of me, maybe in her early to mid-70's. She looked me up and down and then said "That color looks very good on you." I say "Thank you!" She says "You should be grateful" I am befuddled and can't think of anything to say...she continues by saying "I don't compliment blondes very often." Now I want to know why! Is it because she thinks blondes aren't smart? Or because her husband cheated on her with a blonde? Or maybe she's always wanted to be a blonde and is jealous? Regardless of why, I found it very funny!

[] Matching...my sister and I tend to match (without planning), we'll wear the same color or type of clothing when we see each other. We have this connection that doesn't just apply to clothing and is very hard to describe. She came to my office and lo and behold we both had on purple shirts and grey pants! It's like magic. And it makes me smile! Love her! (I love all my sisters dearly, by the way!)

[] Dishwasher...Grr! Arggg! I unloaded the dishwasher after work and after I had put the last dish away and was about to re-load I noticed that the detergent tab was sitting in the bottom undissolved. Great! Therefore, I basically washed ALL of our dishes because I couldn't remember how many plates I had put away and forget me trying to figure which silverware hadn't been cleaned properly. It was quite the debacle.

[]Knife...This one deserves a picture! :) As you read above, I was re-washing ALL of our dishes so everything that was going in the 2nd load was on the countertop. I was making grilled cheese & turkey sandwiches for Mr. Ski and I, when I leaned over and felt something slide down my leg. When I looked down I saw this... 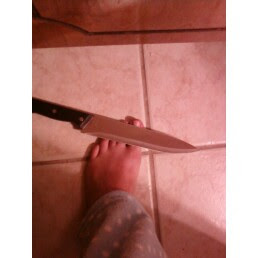 Thank heavens I didn't look down when I first felt something sliding down my leg, I would have most likely OVERreacted and caused the knife to land differently potentially slicing off one (or more) of my tootsies!

[] Finger...Shortly after the above knife incident, I was washing another knife to cut my mommy's yummy bread for the sandwiches when I almost sliced off my finger. The serated knife (J.A. Henckels, so SHARP) went around my finger completely and had it been angled a hair more...bye bye finger! After that I decided I should only be allowed to use plastic spoons!

[] Feet...finally, my feet feel like they are literally on fire sometimes. It's not athlete's foot (which reminds me of a Mitch joke) because there is no rash and it doesn't burn all the time it's more of a hot feeling. Anybody have any idea as to what might be causing that?