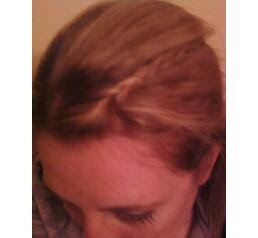 This is what I do at night while watching all those reality shows on my dvr. I braid my hair. It's weird, but it's what I do. I don't do the best job and wouldn't wear them out in public but for some reason they make me happy.

Holy Chihuahuas, Christmas is in 3 days! And I'm not done shopping. I suck. Officially. I'm really bummed too because I was working on this really cool photo project for my parents and it totally failed. It was a disappointment because I think they would have really liked it! Maybe it will work out for their anniversary present.

In other news, I have finally found a video game that I'm relatively good at...Cabela's Big Game Hunter for the Wii. I totally rock at it. I'm not being cocky, I promise but I have to brag about it because I suck at most all video games (aside from Wii Bowling) but not this one! Mr. Ski was even impressed. It made me smile and stay up all night playing (for real) but that's beside the point! :)
Posted by MrsSki at 3:48 PM