+ I killed a HUGE spider on our front porch. It basically took a half of a can of Black Flag. I swear I have killed more bugs since I've been married than I ever did when I was single.

+ Mr. Ski made blueberry pancakes for breakfast. They were yummy. I love him.

+ I have had constant indigestion for the last two weeks. Grr. And just in case you were going to ask...I'm not preggers.

+ Gidget got her Halloween costume early this year. Check it out! 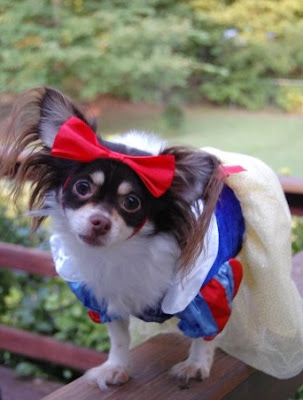 + I almost quit my job on Wednesday. It was a really bad day that ended with me sobbing on the phone with Mr. Ski.

+ I joined Twitter today. I wanted to be in the loop. The only people following me so far were advertising personal ads and naughty websites. So I blocked them and I'm already reconsidering this Twitter decision.

+ As I was walking out of the grocery store I saw a used condom on the ground. Um, GROSS! Who has sex in a parking lot at the grocery store? I guess someone got lucky before picking up milk, bread, and eggs.

+ A convertible passed me yesterday on my drive home. It had this written on the back window: "Inner beauty doesn't get you laid." I did laugh, but then laughed harder when I noticed that the female driver was quite unattractive. I guess beauty really is in the eye of the beholder.

+ My birthday is in seven days. And I will be all alone. Bummer. OH well, it's not like birthdays are important after 21.

+ To further prove that my birthday is no big thing anymore ( I used to proclaim that the whole month of September was to celebrate my birth...for real!) as I was making a list for Mr. Ski (he's not the greatest at picking presents, hey, he makes me a list too so this is normal for us!) and so far my list consists of an itunes card and a filing cabinet. Wow...I've gotten pretty boring.

+ I went to a bachelorette party last weekend. It was fun except I had to pry details out of the host. She was supposed to send an invite...didn't. So, I email her asking if it was still going on. She says "yes." So I email her back with "what time, where, etc." and she says "I sent an invitation I don't know what happened" Can't a girl get some frickin' details?! So I send another email with "what time, when, etc." and she responds "Hilton at 7pm for pizza and lingerie party then we're going out downtown." So I send another email "What size does she wear" she responds "34D and small" and then I vomited. Not really, but those sizes are ridiculous! On Saturday I was talking to the bachelorette's sister. And she tells me that there's a theme for the party....Goth. HOLY CRAP! Why in the hell didn't the HOST tell me this? Oh yeah probably because I had to pry details from her to begin with. I tell the bachelorette's sister that I'm not dressing up because I don't have time to find anything. I make it to the Hilton on time and I thought when I walked in I would see people dressed in black with crazy eyeliner and chains and instead I saw 15 girls in skirts, argyle sweaters, tennis shoes, and hats. Hmm...this doesn't seem very Goth...is there a preppy Goth these days? Her sister and I go outside to smoke and I tell her that no one looks very Goth. She laughed and said that she said the theme was GOLF not GOTH. Ohhhhhhhhhhhhhhh, that makes sense now. Thank God I didn't show up in Goth attire, I would have been way out of place!

The font on this post is being STUPID....sorry for all the mis-match.