Just when I thought the Snuggie craze was almost coming to an end I heard about this on NPR...and I just had to check out the website where I saw THIS video:

OK, just a couple of points.

1. Don't you just LOVE how infomercials make the simplest things look impossible?! Granted it is tough to put dog sweaters on but I don't give up that easily. But of course, I'm not just referring to this one infomercial, I have seen tons that have depicted a person doing a task that generally isn't that difficult but is made to look like it's the hardest, most inconvenient thing in the world. This is one of mine and Mr. Ski's favorite things to laugh at when we're not able to fast forward commercials.

2. Quick Question: Since when does a dog's fur not keep it warm...isn't that fur's job?

3. I love how there is a dog whimpering during every scene where the pooch ISN'T wearing a Snuggie Dog. Poor puppy has been so so sad because he hasn't had a Snuggie Dog.

4. The talking dog collar. Pretty Cool. And so much easier than those silly metal tags with the information engraved on them. At least with the engraved tags you don't have to worry about the batteries dying or the tag getting wet and since when is it so hard to READ a tag.

5. Maybe I should get one for Gidget and make my own video. I have a feeling she won't like the Snuggie any more than she likes the other ridiculous items of clothing I put on her like this: 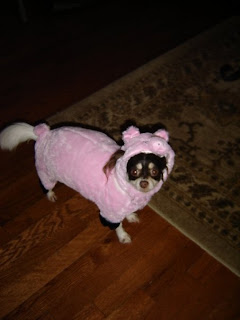 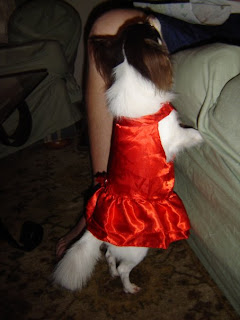 I have to admit though, Gidget really does enjoy wearing that sassy red dress. Who wouldn't?! I think that the only reason she doesn't mind it is because it's not as restraining as some of the other outfits.

I will admit that I have more outfits...just a couple sweaters and a hoodie to be exact but I have always vowed to never spend more than ten dollars on them and usually they are really cheap dog clothes on sale. For instance, the red dress above I got for the bargain price of a DOLLAR! I really wish I could find other pictures. Although, I think I've embarrassed myself enough already gushing about outfits for my DOG. I think a baby might cure this obsession but also think...that's no reason to have a baby.

I will definitely post pictures if I get the urge to buy a Snuggie Dog for Gidget....I'm thinking that Mr. Ski will not condone this purchase. So maybe not.
Posted by MrsSki at 2:58 PM