In early 2006 I was driving with my bff pookie to Colorado so she could find an apartment and so that she wouldn't have to drive the whole way by herself. Her hubby was coming home from overseas soon so the plan was I was going to ride with her there and then once she was settled I was going to fly home. She drove the majority of the way during the day and then I took over the night shift. We were driving through Kansas....by the way what a boring state with absolutely nothing to look at....anyways, I was driving and there were very few cars 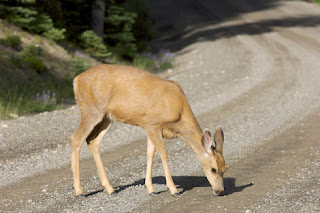 on the road. I came up on a tractor trailor that was in the right hand lane, I went to pass him and as I'm driving past him I suddenly notice something laying in the road, it was a deer! I had no where to go...the tractor trailer was on my right and there was not another lane on my left so I got over as far left as I could without going off the road and prepared myself to hit that deer. I hit it's butt...it was scary. I felt bad too because I didn't know if any damage had been done to the car but I did manage to stay on the road. I was so shaken up though that pookie had to start driving again. Ever since that night I have been terrified of deer.

Once while in the car with pookie again but this time in her home state we were driving on a road that is known for having a lot of deer. I was so tense and scared! I could see all their beady eyes staring back at me in the darkness and I was just waiting for one of them to dart in the road. Pookie said she could feel my fear as we drove down that road. It probably doesn't help that I have several friends who have also had close encounters with deer that were much worse than my own. Like a girl I worked with who while she was driving home a deer came through her front windshield. It was laying on her seatbelt so she couldn't get out of the car and no one would stop to help her. The cops told her that if that deer's legs hadn't been facing the passenger side door the deer would have kicked her to death. Nice. Or a friend of my sister's who had a deer come through her windshield and smashed into her face! Her and the deer head butted...she had to have countless facial surgeries after that encounter! This is all SUPER. SCARY. TO. ME!! I am constantly on the look out for deer and freak out if I see one while driving almost to the point where I think I'd be more likely to get myself in a wreck than the deer causing one.

So, all this to say I have a fear of deer! They are like large rats who can do serious damage to cars, faces, and states of mind! I'm still holding onto to the tunnel my imagination drew up when I was 9 or so...the tunnel that will only let in sun if you want it too (can you tell that I used to hate trying to sleep on long road trips but the sun got in my eyes or made me hot), your car drives on tracks so there's no real need to have someone in the driver's seat (which meant Dad could play real games with me instead of the ABC game or something similar), no rain could get in so that basically would eliminate hydroplaning (another fear of mine...stupid wreck!) oh and no animals especially deer can ever be in the tunnel (this one was added). Ah, I can dream.

So now you know why I'm scared of deer and why I will freak out if I see a deer anywhere if I happen to be around you...don't laugh, just pat me on the back and tell me everything will be ok. Maybe I need to attend S.O.D.A. (Scared of Deer Anonymous)!

Since we're talking about strange facts about me here's another:

I LOVE LOVE LOVE the smell of the post office.
Posted by MrsSki at 2:05 PM