To do my favorite Friday event this past week...FRIDAY FRAGMENTS! I guess I will just have to wait until next week to do Mrs. 4444's Friday Funtivity! (do you like how I make up words? just stick around!) So because I missed Friday's blogtivity (I've got a slew of these) I'm going to do something else...I'll call it Monday Mush.

**The funniest thing is that I didn't do Friday Fragments last week because I did not have time, I was actually working. I will wait for you to get back in your seat. Not saying I don't work, I do but usually I can do multiple things at once because there are rare times when things are actually due immediately. Usually it goes like this:

Boss: Mrs. Ski, I need you to do this and this and a comparison on this and that and then protect and save everything.

Me: Sure, no problem. I'll get right on that. (since I am ADHD I like having tasks with firm due dates and I just thought that this was due right then or the next day)

Me: ::Thinking to myself:: Don't freaking give it to me until you need it!! Because by you saying I need this...I think now...then you say not for 3 weeks...and I put it in the later pile that I inevitably forget about! Then when you ask me for it 3 weeks from now I have to lie and say it's almost done and then frantically do it before the end of the day. Basically, next time just give it to me at most a week before you need it...if you can't stand to hold off any longer.

***I'm officially going to take away Gidget's womanhood. Sad I know. But there are a couple of reasons why it's the perfect timing: 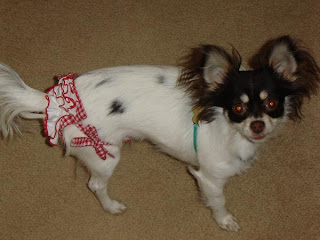 ****I mowed both the front and back yards yesterday. While mowing the front side yard I came across a rather large snake skin...pretty creepy. Although I think Mr. Ski may have been more creepified than I was...he hates snakes.

*****I love hearing other people's drama. I hate drama involving me but if it has nothing to do with me BRING. IT. ON. The Army tends to produce a heck of a lot of drama without even trying. For instance, the best way to get drama brewing is to hold a Military Ball...there's always something that goes down. Either it's so and so's wife and the trashiest dress imaginable, or so and so's husband drunker than drunk, or so and so got a DUI when they provide a ride home, or so and so's wife grinding on everyone besides her husband on the dance floor, and on and on and on. I could provide more but it's just better to say that I would rather hear about drama than be anywhere in the vicinity of it going down. Therefore, I'm quite glad that we didn't attend the Military Ball this last weekend but by god, I loved hearing the tales.
Posted by MrsSki at 4:20 PM