The End is Near

Well, it looks as if the Army is almost done with us. I haven't talked about it much only because everything is so uncertain in the military. In fact, the only thing certain in the military is uncertainty. Heck, they told us almost 2 years ago that Mr. Ski would be out within 3 months or so. As you can probably guess that did not happen. Mr. Ski is currently in a unit that is for rehabilitating injured soldiers (he has a back injury that often leaves him being unable to move). The WTU for most is a stopping point between being active duty and getting out...for us it has been a completely different experience. He has been in the WTU since the fall of 2007. This hasn't been all bad. One, he hasn't been able to deploy (answered prayer). Two, he was able to start school and has finished his associates degree and is now working towards his bachelors. Three, he was able to start volunteering with the post's high school's football team, which has been an amazing experience for him and oddly enough for me. Four, we have been able to continue Army benefits which is another answered prayer especially with all of my heart problems. As much as the Army has done for us they are finally beginning the process of sending Mr. Ski through the medical board. While I know this won't be a quick process it's still a process. He has to have 2 physicals and then they will send his packet to Fort Sam Houston where a team there will determine how much disability he will receive for his injury. Once that is completed they will send it back and Mr. Ski will either accept or decline the percentage they offer. If he declines they will resend the packet to Fort Sam Houston....if he accepts he will go on terminal leave and then be done with the military...for good.

I have a whole range of emotions going on. On one hand I'm so happy, no longer will the Army dictate what we do and when we do it, no more deployments, no more staff duty, no more early formations and no more bs. On the other hand I am scared, we no longer will have the stability of an Army paycheck each month, no more Army benefits (while hard to get appointments it's still good insurance) and no more job security. Mr. Ski will continue with school except he will go full time, I will continue to commute to my job in bigger city (even though I hate the commute it would be completely absurd for me to disrupt what stability this job does provide when we are losing the Army stability), I will start shopping for insurance or just go without (heart surgery doesn't really allow you to have the cheapest plans), and if needed Mr. Ski will get a part-time job. Hopefully, he won't have to. I would like him to be able to do school full time so he can finish quicker so we can start his job hunt sooner. At least we have a plan, sort of.

I'm still scared though. It's funny because I remember counting down the months until his contract was up...that day has come and gone...but now it's so darn real! I guess that's the Army for you though, they try to make you feel like you will be so lost without them when millions of people do it everyday without the stability of the Army. Don't get me wrong, I am not knocking the Army. The Army did things for Mr. Ski that otherwise wouldn't have come about. They gave him exceptional leadership skills, self-confidence and a ridiculous amount of motivation (the man never procrastinates...unlike me!) while also providing him with pride for the job he has done for our country. When Mr. Ski and I first got married he was over half way done with his military obligation, I was so ready for him to get out...couldn't wait for the day probably because I hadn't seen the stability the m 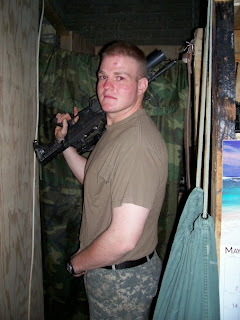 ilitary could offer and now I'm afraid I've gotten comfortable...maybe too comfortable with what the Army provides. It's not the best paying job with the best hours but it is a job with good benefits. Plus, my heart swells when I think about what Mr. Ski has given for our country. I am so proud of him plain and simple. He has been and always will be my hero...ACU's or not. Maybe I'm sad because this chapter of our lives is ending and a new uncertain chapter is about to start. I never have dealt well with change. I have no doubts that we will make it and make the best of it as we make it, it's just hard knowing that now we face even more uncertainty.

I'll miss you Army...just a little. But I am so glad I will finally have my husband all to myself and you will never ever take him away from me again. One of my favorite sayings is "The Army is my husband's mistress and sometimes that bitch gets all the attention." I am ready to kick that mistress to the curb!
Posted by MrsSki at 2:38 PM