Update, Update! Read all about it!

I just realized that I haven't posted anything to my blog since March 31st!! Although it doesn't really surprise me...I tend to start things and be really intense about them for the first couple weeks days and then it falls by the wayside. For instance, I was gung ho about sewing...keep in mind I've never sewed a day in my life besides the pitiful attempts at making doll clothes. Mainly I wanted to sew so I could make my own diaper covers...also keep in mind I am not pregnant...I just started doing mad research one day on cloth diapering and decided that when Mr. Ski and I have children I want to cloth diaper. Mainly because disposable diapers are so darn expensive and we all know I hate to spend money. Back to the April update:

---I spent the first weekend in April in San Antonio working for my second job. You know, the one that includes all the cheerleaders, loud music, and photo taking. It was a great show...meaning it was over at like four in the afternoon day one! Yay! So we all went down to the river walk...more like lazy river or a really long skinny lake or a really long skinny pond but whatever...and ate dinner. Oh, we also went to the Alamo. 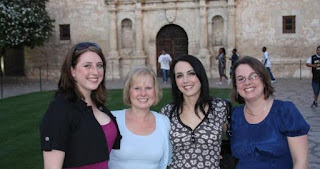