*Gidget. Is my dog. I say my dog because Mr. Ski gets quite upset when I refer to her as our dog. They don't exactly get along...it could be the height difference, he's 6'4" and she's about 6", it could be the weight difference because she only weighs 5 pounds, or it could just be that she annoys the crap out of him...I'm guessing though that it's a combination of all three! I get it, he doesn't like her, I just don't understand why he doesn't like her. Darn it, she's cute as a button especially in sweaters and furry hats! 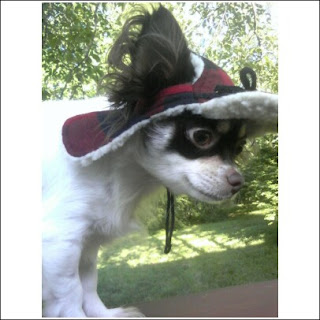 (I think this could be another reason he doesn't like her.) But isn't she adorable?! I got Gidget before Mr. Ski and I began dating so I can understand why he doesn't have the connection with her that I have. I just really wish he did. So, since I've been travelling a lot the duties of carrying for this loveable, five pound chihuahua have fallen on his shoulders. He doesn't always get excited about this fact but has accepted it. So this last trip I was in Oregon and would call home a couple or more times a day to see what he was up to. EVERY time I called he was doing something with Gidget. Taking her outside, playing with her, and once when I called he had just gotten home from running an errand and had left her out (this has NEVER happened in her whole doggie life) I was on the phone as he got home and heard "No poop in the living room, no poop in the hallway, no poop in the kitchen....GOOD GIRL GIDGIE!" It BLEW my mind. Yet as soon as I get home it's business as usual and back to disliking Ms. Gidget! Oh well, at least he's nice to her while I'm away and she's not getting any mommy love. Now for the actual funny part...when I got home I took her outside and notice that some of her whiskers (I love the word whiskers, don't ask me why) were much shorter than the whiskers on the other side of her face. Hmm. Mr. Ski, did you cut Gidget's whiskers?! No. Then why do they look all funny. Oh, well I did play the lighter game with her. Ahhh, the lighter game. My dog is a bit of a freak and so when you light a lighter she goes INSANE running around, biting at it, acting like a nut. So as they were playing with the lighter Gidgie got a little too close to the flame and singed her whiskers! hahahahaha! Hopefully they grow back soon because she looks a little weird right now.


**Rain. Gah, rain doesn't bother me like some people although I absolutely abhor driving in the rain. I had a fairly bad accident on the interstate because I hydroplaned a couple years ago so everytime it rains I go into "granny" mode with my hands at 10 and 2, driving way way way below the speed limit and freaking out everytime I hit a puddle.


***Diet. I need to go on one of these. None of my clothes fit. Yet, I refuse REFUSE to buy new clothes that bigger, especially if I plan on going on a diet and losing weight. Buying bigger clothes would be a waste of money because I am going to lose this weight...ideally.


****DVR. I believe I blogged about my DVR in last week's FF but now I'm mad at my DVR. It's not recording our set series!!! Which means we didn't get to see Amazing Race or Lost this week. Two of our favs! The only reason we got to see Biggest Loser was because it started an hour later and the dvr happened to already be on the channel it was on so we were able to watch all of it...but it was a close call. Then I call Directv to bitch trouble shoot and the sweetest older lady after putting me on hold to research my problem hung up on me. Therefore, DVR is still broken and I'm still not happy about it.
Posted by MrsSki at 1:23 PM