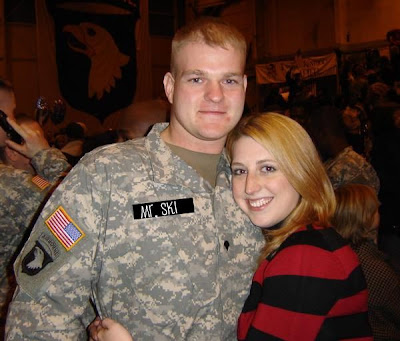 I got the call. From Mr. Ski's mom that is, letting me know that they had arrived. It was a chilly November night in 2006 and I couldn't decide if I was shaking because I was nervous about seeing Mr. Ski for the first time in seven years or because I was meeting his family before I even saw him or if I was just cold! I decided that it was a mixture of all three! Mr. Ski's mom was very sweet and we sat on the bus together as we rode out to the hangar where the plane would be arriving. I was definitely a bundle of nerves even after meeting her. We got off the bus at a hangar and stood outside waiting for the plane to land. It felt like it took forever but I know that it couldn't have been more than 30 minutes before the plane landed and began to taxi toward us. I took pictures...lots of them. We waited and waited and finally the doors opened and soldiers began flooding off the plane all in uniform all anxiously awaiting to see their families. They got into formation, I hadn't seen Mr. Ski yet but I kept looking. Then all the families were told to file into the hangar and sit on the bleachers. So in we went, keep in mind that this was my first Army experience so I had no idea what the procedure would be like. It was so surreal, I was sitting amongst husbands, wives, mothers, fathers, sons, and daughters all waiting to see the ones they love. The most touching thing was to see infants in their mother's arms waiting to see their daddies for the first time ever. It made me teary eyed then and it still makes me teary eyed. I got my camera ready, set it to record and videoed the gigantic medal doors of the hangar opening and hundreds of soldiers marching in. Everyone was clapping and cheering and in all that madness....I saw him. I screamed really loud, you can hear it on the video, when I saw him. And I swear to you I knew right then when I saw him that he was the man I was going to marry. I think you can hear me screaming "There he is! There he is!" I was just about to bound off those bleachers and jump in his arms when I noticed that everyone else was staying where they were. I quickly realized that it would be a little bit before we were truly reunited. We waited for the company flags to be returned and raised and the company commander to talk and pray before the soldiers were released to their loved ones. Joe, Mr. Ski's brother beat his mom and myself to Mr. Ski. Which was ok. Mr. Ski's mom held my hand as we walked over to him. She hugged him and then gave me to him. I will never in my life forget how that felt. For the first time in a long time things felt perfectly in order. We hugged for a long bit and then shared the first of many kisses. WOW! I knew then that I never wanted to be without him. My heart was bursting at the seams and all I could do was hold him and look at him realizing that this man right here whether he knew it or not would be my husband one day.

We only got a mere 20 minutes together before all the soldiers had to get back into formation and exit the hangar to go return their guns and gear. The families boarded the buses once again and began the trip back to where we started. We were to wait in the cafeteria for our loved ones to get done. Geeze, could there be any more waiting!!! (It is definitely a preview into military life and all of the waiting involved.) A very long 2 hours went by and he found me, outside nervously smoking a cigarette. We hugged...again and kissed...again and then we started walking to my car. I'm usually one who needs to know plans...but I didn't care this night. As long as I was with him I was ok. All my nervousness and fears were moot at this point. It was like we'd always been together. We talked and joked and stared at each other for the majority of that first night. I didn't sleep at all. I ended up staying up with him all night losing track of the time on numerous occasions. It was almost surprising when the sun rose. We went to breakfast with his mom and then to the mall. I never got tired, I just wanted to be with him. I didn't go back to Nashville until late Monday night. And it was hard to leave. I returned Tuesday night after I got off work and we were together about everyday after that. I guess that's when my commute to and from Fort C began.

Thanksgiving that year was going to be held at my sister's house a short drive away. I invited Mr. Ski, thinking that if he could withstand a holiday with every member of not only my family but my brother-in-law's family too, there were about 20 of us in all, that he was a keeper! He was such a trooper and everyone was so excited to meet him. We were both told that day that no one had ever seen me that happy before. But I had every reason to be happy. I can't tell you how many holidays I had wished that I had someone special to share it with. My sisters are all older than me and all had significant others, all but me. Not that I cared every year, but that year I had begun to want someone to be with me at these family functions and now I had it! My family loved him, especially my nieces and nephews. His mom did keep telling me that one night we talked on the phone before he came home how good he was with kids...and she was right! I didn't think things could get any better....but they did.


On December 31, 2006 after eating lunch with his mom and my best friend at our favorite Mexican restaurant we were headed back to my apartment. My best friend had left lunch early with some lame excuse as to why, I can't even remember it now. And I have to admit I was a little angry with Mr. Ski because I had wanted to call her to make sure she was ok and he wouldn't let me. I was pouting as I walked to the car and I remember Mr. Ski saying 'don't get mad...not today.' I thought that she would be waiting outside for us to get back because I knew she didn't have a key to get in but she wasn't anywhere in sight. Odd. Mr. Ski and I were walking down the sidewalk about to go up the stairs to my apartment when he stopped me and said, "You know that I'm always going to love you and take care of you right?" The light bulb in my head flashed on! HOLY CRAP!!! We walked up the stairs and he opened the door of my apartment to the most beautiful scene. The apartment was dimly lit and there was a pathway of lit tea light candles on the floor leading to the coffee table that held more lit candles of all sizes and a silver box with a black bow. Mr. Ski and my best friend had been scheming for awhile and now I knew why! Right there in my living room he got down on one knee and began to propose. Don't ask me what all he said that afternoon because I honestly can't remember, do any girls? All I know is that I was screaming in my head YES YES YES!!!!! I started to cry early on in the proposal, Mr. Ski has an amazing way with words plus I couldn't believe that this was happening to me! It made me so happy to look in his eyes (which were a little teary too...) and tell him YES! We hugged and kissed and hugged and kissed some more! What I do remember is thinking...I wish I would have dressed up a little or washed my hair! But I hadn't and he still proposed even though I was in jeans and long sleeved t-shirt with my hair in a pony tail! It must be true love!
Posted by MrsSki at 3:02 PM